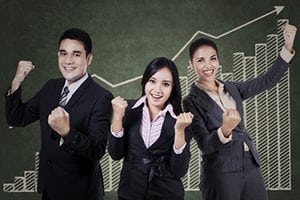 Have you ever wondered if it’s healthy to be a small business owner?  It turns out that despite the challenges and pressures of running your own business, it’s not only healthy for you personally, it is also healthy for our economy. Canadian small business owners generate big numbers for our GNP. It’s time to celebrate your contributions to your family and the national economy.

As the Canadian and U.S. economies slowly recover, an interesting picture is emerging in terms of the important role small business entrepreneurs play in reinvigorating economic growth. Not surprisingly, many people who found themselves victims of corporate downsizing have elected to start their own business, taking a more proactive control of their own careers, rather than having to rely on the uncertainty of corporate decision-making.

According to Industry Canada, there are over 100,000 new small businesses started annually in Canada. While start-ups are most often operated by their owners, small businesses also accounted for the creation of over 21,000 jobs in 2011, which represented 43% of the total jobs created in the private sector. Canadian small business now accounts for over 48% of the private sector labour force and surprisingly represents 86% of Canadian exports, valuing over $77 billion.

A recent study done by the Canadian Federation of Independent Business identified that Canadians also rank small business owners second only to farmers in terms of public respect. “Canadians recognize the valuable contribution small businesses make to this country,” said Catherine Swift, president of CFIB. “With 97% of the businesses in Canada classified as ‘small,’ Canada is truly a nation of entrepreneurs.” 91% of those surveyed also said that they believe it would be a rewarding experience to run their own business, and 89% thought that it would be rewarding to work in a small business.

Small business owners also report a much greater sense of job satisfaction working for themselves versus in their past corporate positions. A TD Canada Trust Small Business Survey conducted in July of 2011 found that two-thirds of small business owners describe themselves as “very happy.” Small business owners also suggested that the top benefits of owning their own business are the sense of personal achievement (96%) and being able to help their customers and clients (96%). Other benefits include being their own boss (94%), controlling their own destiny (94%) and the opportunity to make more money (85%). Not surprisingly, these incredibly high ratings translate into greater job satisfaction and improved health for Canadian entrepreneurs and our national economy.

As rewarding as running a successful small business may be, it’s not without its challenges, but The UPS Store can help. As we approach October, which is also Small Business Month in Canada, we thought it a good time to celebrate you and your small business.

Small business owners can access special offers and rewards with a Get More card. Find out more: https://www.theupsstore.ca/small-business-solutions/get-more/

15 Ways to Make Trade Shows Work for You

How to Protect Yourself from Identity Theft