How to Manage Millennial and Gen Z Employees 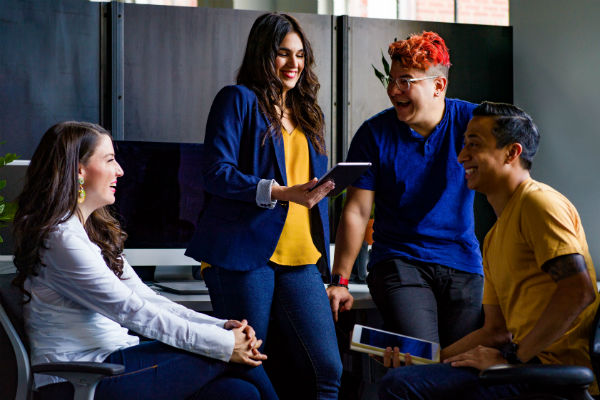 How many different generations do you have working as employees at your small business? These days, it’s not uncommon to count three or possibly even four distinct generational groups among the people on your team.

Between such a range of ages, distinct differences in tastes and preferences are inevitable. And in much the same way that not everyone on your staff enjoys the same kind of music, employees from different generations are likely to respond better, or worse, to different management and leadership styles.

Bridging the generation gap and being able to get the best out of everyone can be a big challenge for some small businesses. If you’re struggling to attract and motivate millennial or Gen Z employees, here are a few things to think about.

Offer meaningful opportunities and a path to improvement

Much like nearly every group of young people that comes along, millennials and Gen Z have been derided as being entitled and self-centred. In reality, it’s an inaccurate picture. Both groups overwhelmingly say they want to perform meaningful work and be part of something they can believe in. They share common values with their elders and tend to have an elevated sense of social responsibility.

Cast aside any negative stereotypes you may hold about younger generations and be willing to offer them an avenue to the types of important, meaty opportunities they’ll want to embrace. Show them how their role is a vital part of the big picture at your business, and what they’re doing to contribute to success. While you’re at it, don’t forget about providing a pathway to self-improvement through learning and professional development – millennials and Gen Z both say they want to get better and know more.

Make space for creativity and entrepreneurship

Millennials and Gen Z share a similar, start-up style spirit when it comes to work, an eagerness to shake off past practices and strike a new path that’s all their own. While some employers might find that unnerving or insubordinate, trying to suppress such behaviour would be a serious mistake – you’ll cut off new thinking and ideas while driving talented people away from your workplace due to your excessive rigidity. Instead, find a way to harness the creative power and raw energy of your younger employees and use it to help drive your business forward. Be willing to give them a little time and space to work on new ideas and offer encouragement instead of shutting them down if they make a suggestion that’s above their pay grade.

Don’t be a technological dinosaur

Younger, tech-savvy employees from Gen Z are said to be ‘digital natives,’ meaning they’ve grown up knowing nothing but a world of complete digital connectivity. As such, they’re generally eager and excited to acquire and use the latest and greatest in gadgets and apps, and don’t tend to have a great deal of patience for outdated technology. If your small business isn’t keeping up to date with what’s new in software and hardware, communicating via social networks, or embracing trends in wearable tech and virtual reality, you run the risk of losing touch with Gen Z and some millennial employees, and losing their respect as well.

Listen to (or get mentorship from) millennials and Gen Z

Concerned about your ability to stay abreast of what matters to millennials? Unsure what Gen Z is really interested in? Seek out staffers from those age groups and find some willing to keep you up to date on the issues they’re interested in. It’s an approach at least one CEO has chosen, scheduling monthly meetings with her “millennial mentor” in an inspired reversal of the traditional mentorship structure.

Even if you forgo a formal ‘mentorship,’ make time to talk with and listen to your younger staffers. More than any generation before, millennials and Gen Z thrive on feedback, conversation and connectivity.

Finally, if you’ve already got a good rapport with some of your millennial or Gen Z staffers, consider making them part of the process when it comes to hiring and introductory training – there’s no one like a peer to assess and integrate incoming employees.

How to Prepare to Your Business for Reopening

Re-Opening Your Business? Here’s How The UPS Store Can Help